The camper passed its ITV (Andorran equivalent of MOT or Smog Test) on Tuesday evening so I am good for another year. An hour later I was camped in the LZ at Organyà, one of my favourite places to spend a quiet night. Peter’s Paragliding Nomadness 2008 has begun.

A quick call to Winston (WeGoFly in Ager) in the morning confirmed that he was guiding two British pilots for the week and would be driving to launch regularly: Rides to launch guaranteed. Retrieves available for landings near or far. This sounds sweet. 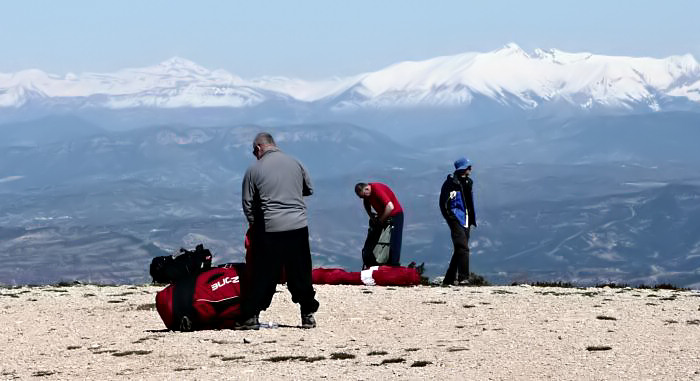 The vast Coll d’Àres launch was deserted except for the three of us. I watched Fred and Mike launch into a moderate south wind mixed with steady thermal cycles before laying out my wing and following them into the sky. Conditions were perfect. The wind was strong enough to soar the entire 19 kilometer Montsec ridge and I peaked out at over 600 meters (2,000 feet) above launch. Out in the valley huge thermals climbed to similar heights. Two hours later, I was ready for a break and headed for the landing field, happy that I had chosen to come to Àger. 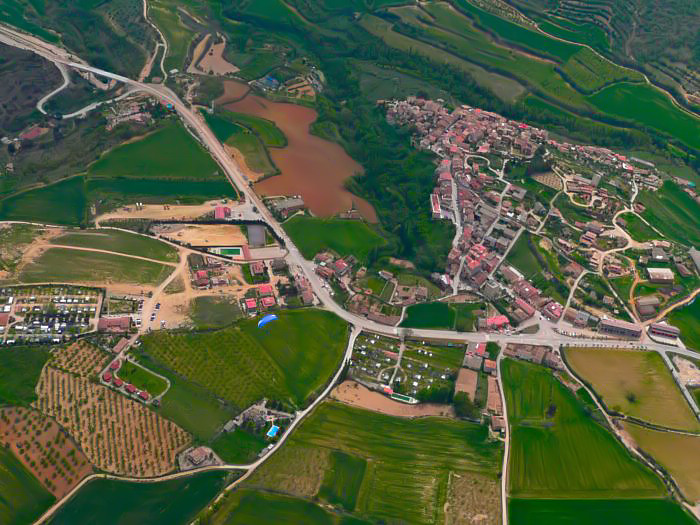 The photo at left shows the convenience of this site. Byron (blue wing) is heading for the LZ, which is adjacent to the comfortable and affordable Vall d’Àger Campground, where my Romahome was parked. The pretty village of Àger clings to the small hill on the right, encircling the traditional Romanesque church, a style familiar to anyone who has visited Catalonia.

Day after day it was the same thing. For five consecutive days I flew two hours or more on every flight before landing for a much needed break. My longest flight was three hours, thirty-eight minutes, when I decided to spiral down to “reduce ballast”. A 64 km triangle around the valley was a piece of cake.

May 1 is a holiday in Spain, as it is in most of the world. Falling on a Thursday this year, Spain has elected for a four day weekend. What better time to hold the First Catalonia Paragliding Championship at Àger.

Our deserted launch is now packed with a hundred eager pilots lining up to depart in waves of 5 abreast, despite the 25 to 40 km winds. There were lots of displays of wing handling skill in the gusting winds. There were also lots of heart stopping moments as pilots were swept off their feet and dragged through the waiting crowds. Miraculously nobody was hurt and everyone made it into the air safely within the 45 minute launch window. 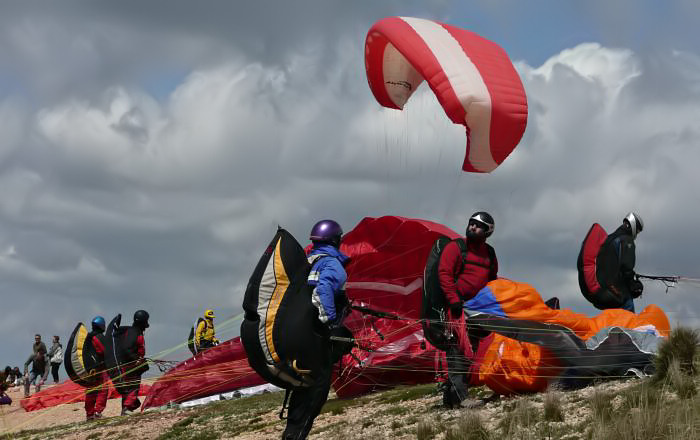 On Friday morning the wind was more easterly, so we elected to launch from the Sant Alís launch. With no crowds and a nice little takeoff facing the wind, we were in the air in no time. I had been flying alone working the eastern ridge of Montsec for about an hour when the entire comp gaggle (73 pilots) invaded from the west. Suddenly the sky was full of wings. It was beautiful to see so many wings in the air, but intimidating to realize how many pilots were chasing the same isolated patches of lift. I am flying the orange wing in this photo on the comp page.

Ten days at Àger has proven to me that this is a first class site for all levels of pilot from beginner (there are several schools here) to sky gods looking to fly cross-country. The launches are wide and safe, the designated landing fields are massive, and there are fields everywhere to land when the lift gives out. The protected valley floor is one great big thermal generator, making this a great place to perfect your thermalling skills. The Montsec ridge goes on forever, so you can choose a spot to play on your own, even with hundreds of wings in the air - which is not going to happen very often.

Winston and Amanda are offering great deals on flying holidays. I have no reservation in heartily recommending Wegofly for your next paragliding holiday. Tell them I sent you.

Update: Winston and Amanda have moved to Portugal. But Brett Janaway is now offering some great guided flying packages at Ager. This is a great opportunity to gain skills from one of the best XC pilots of all time. 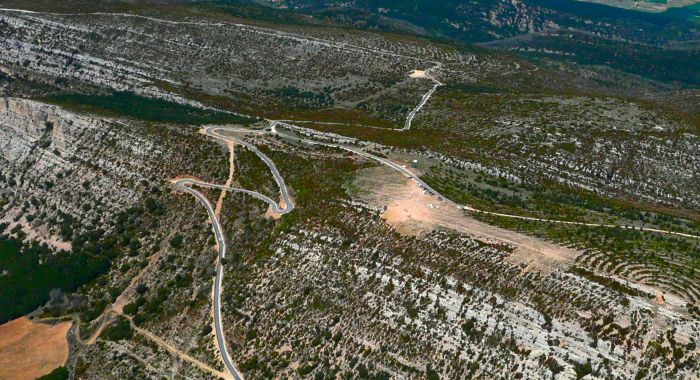 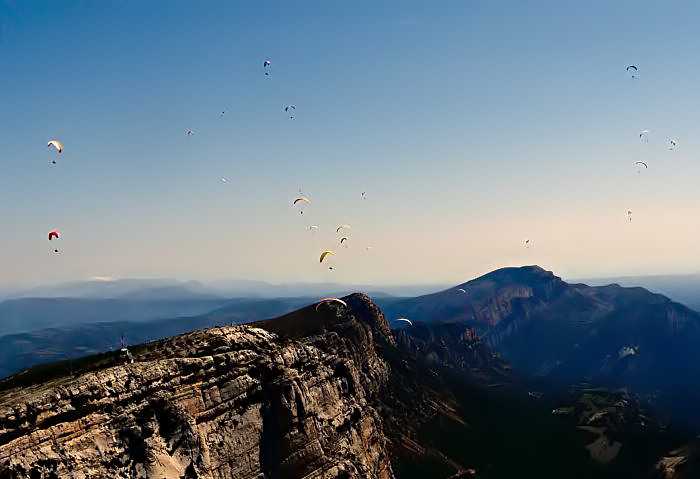 There are more pictures in the Photo Album